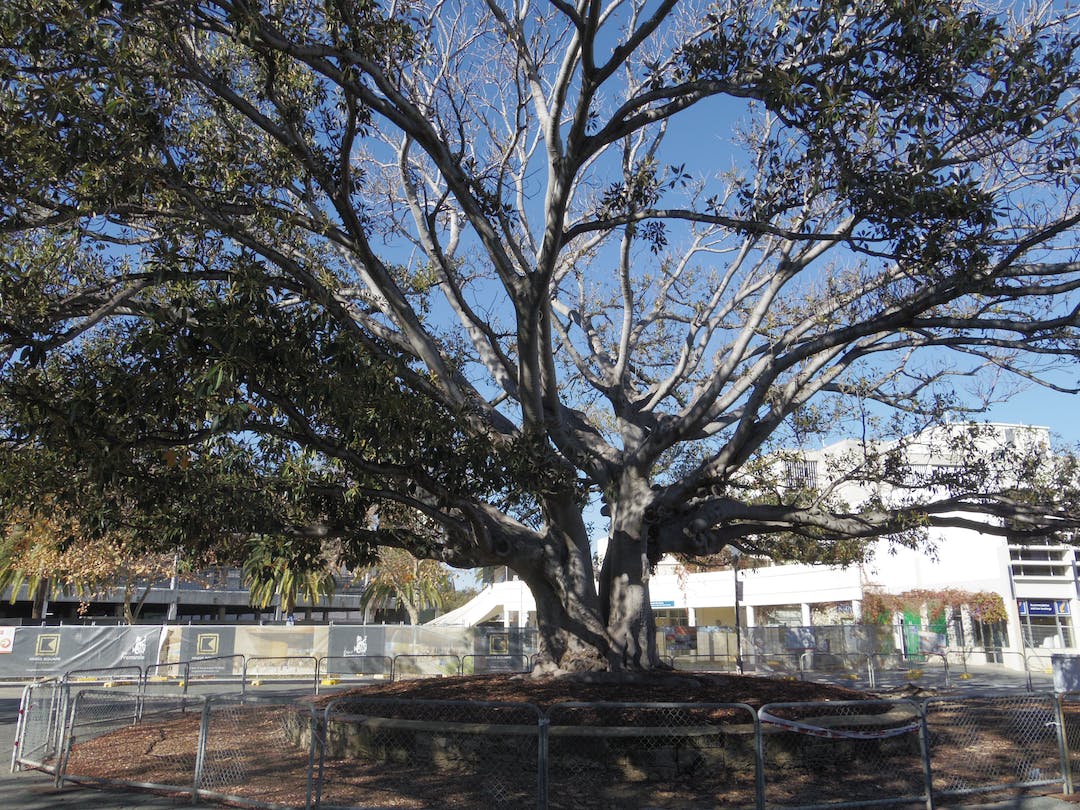 In June this year, we engaged the community on the future of two Moreton Bay figs located in Kings Square, Fremantle.

A decision was made by Fremantle Council in July to remove and replace the trees, which followed the engagement process in which the community supported removing and replacing the ailing trees rather than trying to manage the ever increasing risks associated with keeping them.

To help the legacy of these trees live on, the timber was made available to community groups, artists and individuals through an Expression of Interest (EOI) process. This has now closed.

In June this year, we engaged the community on the future of two Moreton Bay figs located in Kings Square, Fremantle.

A decision was made by Fremantle Council in July to remove and replace the trees, which followed the engagement process in which the community supported removing and replacing the ailing trees rather than trying to manage the ever increasing risks associated with keeping them.

To help the legacy of these trees live on, the timber was made available to community groups, artists and individuals through an Expression of Interest (EOI) process. This has now closed.

The two Moreton Bay Figs trees will be replaced with two mature trees. A London Plane tree will be relocated this week to replace the fig to the south of St John’s Church. The search for a mature Moreton Bay Fig to replace the 'Christmas Fig' is ramping up, with several mature trees already identified as possible replacements. Once a decision on the replacement tree is made by the council, the tree will start being prepared for its move to Kings Square.

The two Moreton Bay Fig trees in question are shown on the map below as no. 4 and no. 5. 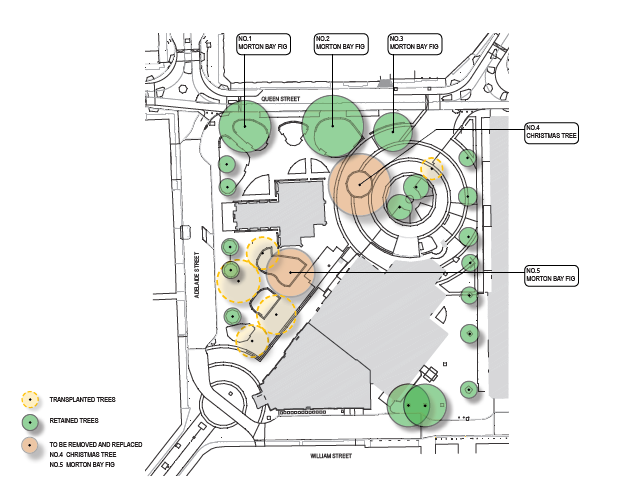 The Moreton Bay Fig (Ficus macrophylla) is a large, spreading tree that usually has a dense crown. They originate from Australia’s east coast, distributed in rainforest from northern Queensland to southern New South Wales. Because of their advancing age and visible decline, the City of Fremantle has been monitoring and managing the health of the fig trees in Kings Square and other parts of Fremantle since 2008.

Why is council being asked to consider this now?

Council approved the final Kings Square Public Realm Concept Design in February 2018. The design aimed to retain as many healthy Moreton Bay figs as possible in recognition of their contribution to the cultural significance of the square. These two trees were included on the basis the City’s management efforts would stabilise or improve the health of these trees and they would contribute to the amenity of Kings Square beyond the renewal.

Since this time there has been further deterioration in these two trees and one is now a public safety risk.

The advice received on tree no.4 in the latest health and condition report (April 2018) is:

"Given the significant canopy decline over the last 5 years, the worsening structural condition of the tree and the proposed playground, this tree is not considered functionally viable and has lost much of its aesthetics. Removal of the tree and replacement with advanced specimens would provide the landscape with a better outcome for the coming decades."

Tree no. 5 did not pass a tree risk assessment in April 2018 and the recommended options were to:

Reduce limbs over the footpath by 30-40% and maintain this indefinitely, remove deadwood on the eastern side or remove the tree based on safety grounds.

Pruning has since been undertaken on tree no. 5 and will need to be continued, find out more below.

What state are the two trees in and what do we know about their future?

Moreton Bay figs are slow growing but observation and documentation of these trees in the Perth region suggests our longer growing period and sandy soils (combined with irrigation) could accelerate their growth rate compared to their native habitat, with a possible effect of shortening their overall lifespan.

They are generally a long-lived species but there is little published literature on their longevity in the greater Perth region. Evidence suggests these two figs were planted in or around the 1880s, making them around 130 years old.

Photographs from 1957 show at that time no paving around the trees, they were most likely surrounded by turf. In the mid-1980s the trees were ‘containerised’ by excavating and building limestone walls with footings. Excavation was probably 600-800mm and is likely to have severed roots. As a relatively slow growing species, possible decline from this could take some time to become evident. The fig trees along Queen Street were not ‘containerised’ and are still healthy. 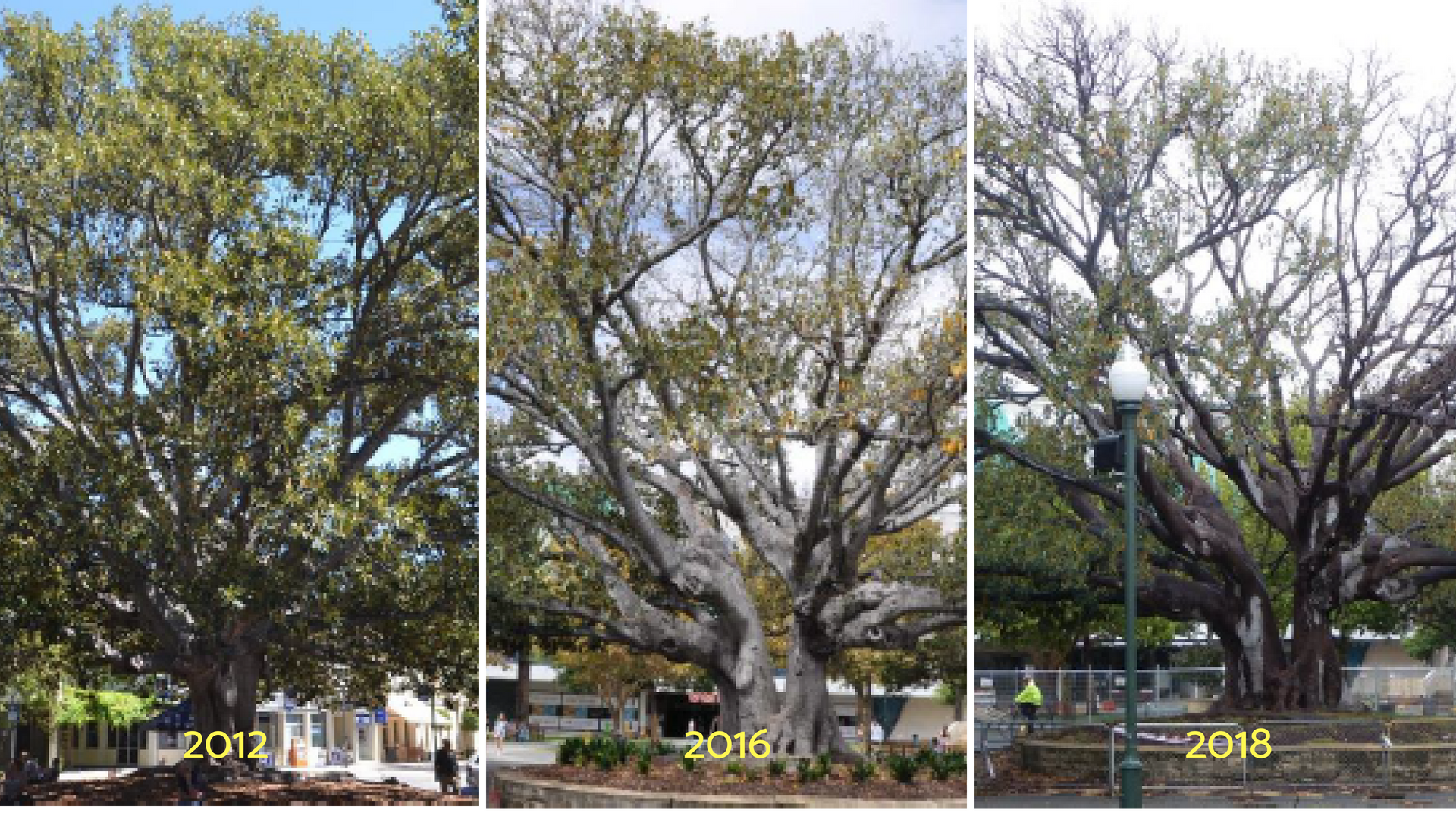 Tree No.4 (eastern side of St. Johns Church, also known as the Christmas Fig) 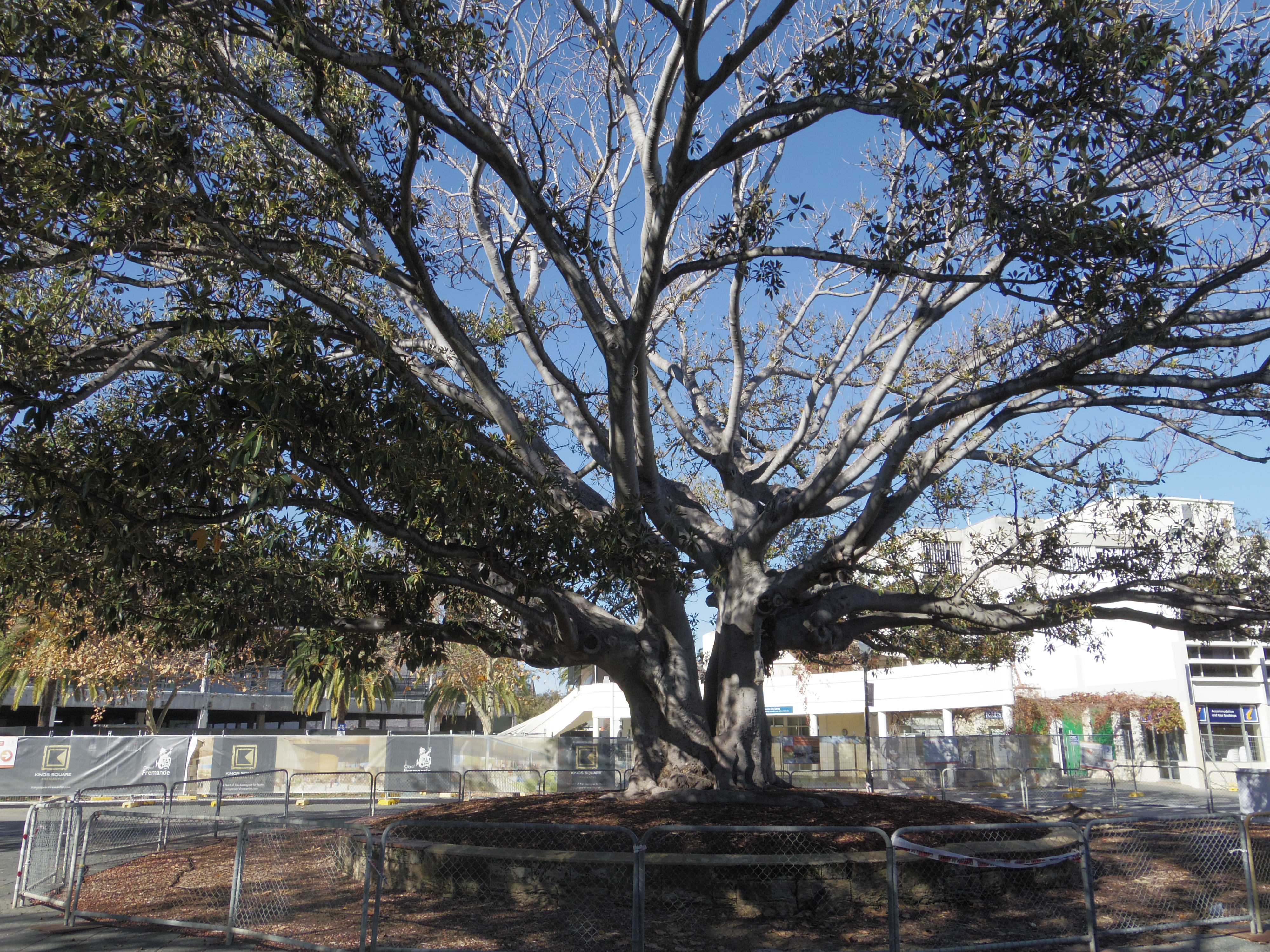 Based on expert recommendations the City has:

Despite these efforts, to date, there has been no sign of improvement in the condition of the tree.

Tree No.5 (southern side of St. Johns Church)

This tree has been under active management since 2008 and the City has followed advice to manage its condition. Despite this, in March 2018 a large branch fell from the tree to the footpath below. In response, the City sought advice from an arborist who recommended the tree be further pruned or removed to ensure public safety. The City completed this pruning in April 2018. 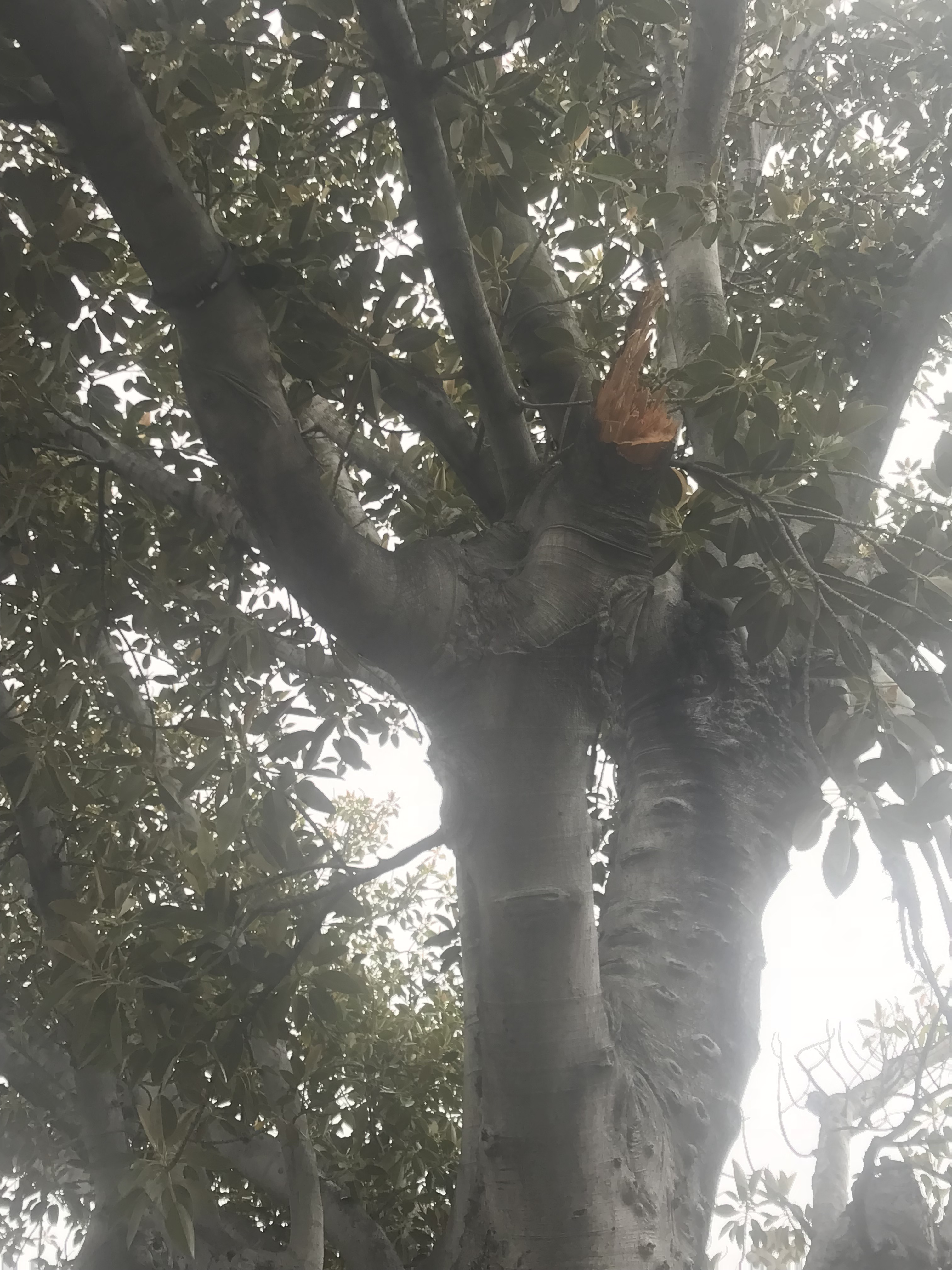 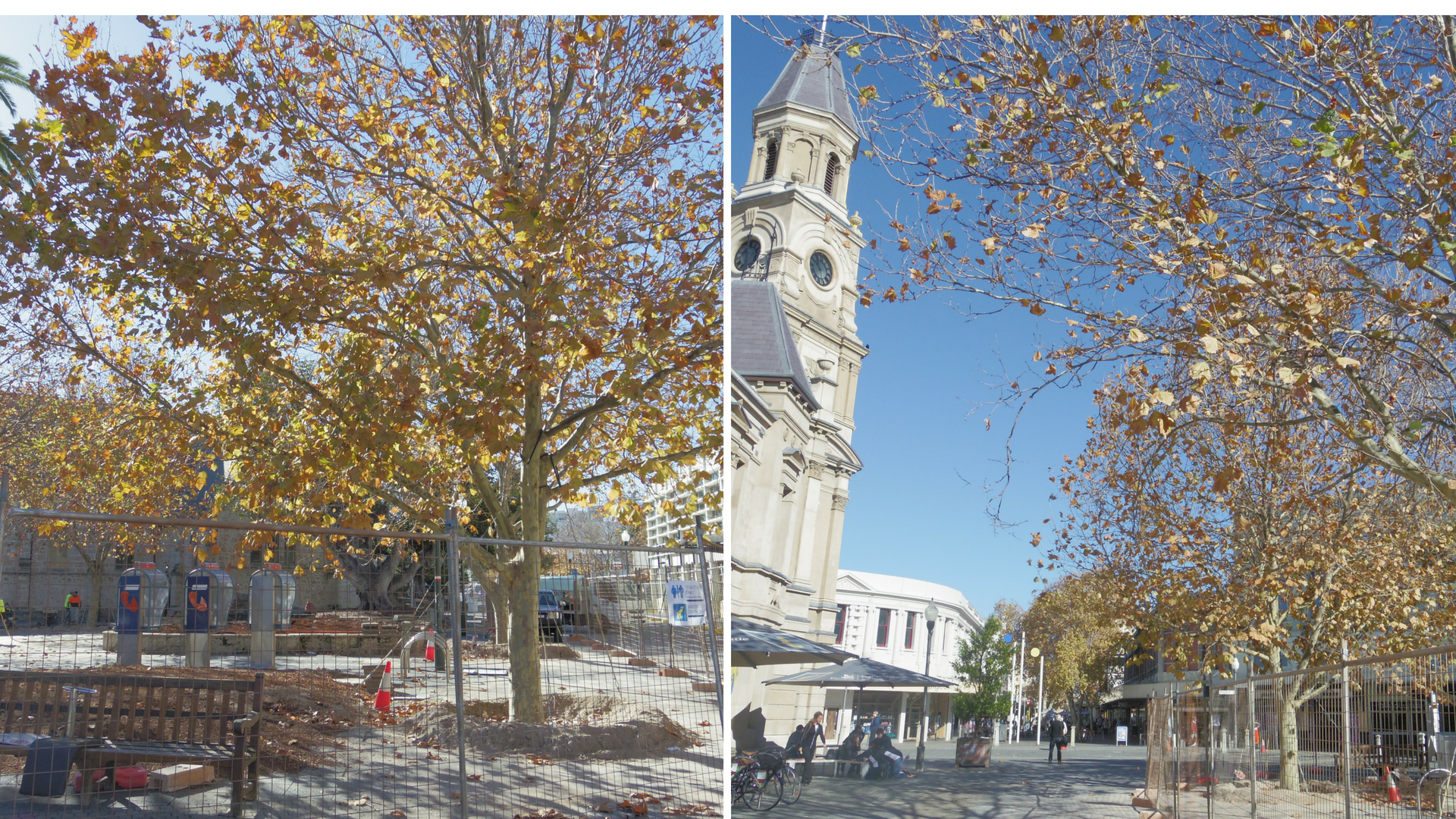