What's this project about?
Why were temporary speed bumps introduced to South Terrace and will they be removed?
What about the rest of South Terrace?

How will the painted surfaces used hold up to wear and tear?

What's this project about?

South Terrace supports an active community, a business precinct, and is also an important transport corridor. To create a pedestrian-friendly environment that supports street life we're proposing some changes to slow traffic and improve the South Terrace streetscape.

The City of Fremantle initially planned to upgrade five intersections between Douro Road and South Street over the coming years. In 2020, a sixth intersection was added at Orient St. A ‘slow’ speed node is proposed at each intersection with vibrant artwork, footpath upgrades, landscaping improvements, new street furniture and trees.

Node one (between Sydney Street and Little Lefroy Lane) - completed in November 2018. It was developed based on traffic analysis, meetings with key stakeholders and community engagement with local residents and businesses. $200,000 from the State Government’s Local Projects, Local Jobs Program was allocated to assist construct the project and the City also contributed $227,000 towards the project.

The proposed order of nodes is outlined below.

Why were temporary speed bumps introduced to South Terrace and will they be removed?

As a result of resident and community concerns about traffic and safety issues, the initial plan was to slow down traffic on South Terrace so the City could make a viable application to Main Roads Western Australia (MRWA) for a reduced posted speed limit on South Terrace. MRWA determine speed limits and associated signage.

Temporary speed bumps were installed on South Terrace mid-2017 to deliver an interim solution while permanent traffic calming and streetscape upgrades were developed and installed. The pre-installation speed for South Terrace was approximately 48km/h. Assessments of traffic speed following the implementation of the temporary speed cushions showed they have been successful in creating a speed environment of 40-42km/h on South Terrace.

Following construction of node one and removal of the temporary speed bumps, the 40-42km/h speed environment was maintained (based on data from 2019). This successful reduction in vehicle speeds on South Terrace was used as evidence to formally apply to MRWA to reduce the posted speed limit to 40km/hr. The application was successful as an area-wide speed limit in April 2021 and new signage and implementation of the revised limit was completed by MRWA in July 2021.

What about the rest of South Terrace?

Node one (Little Lefroy Lane) and the drainage works for node two (Jenkin St) are now complete, with the streetscape component of node two due to be completed in 2021/22.

Further nodes are subject to Council approval over the coming years but are planned in the following order:

The City plans to complete the upgrades in a sequential order.  The order was carefully considered to account for other construction and underground works as well as the City’s resurfacing program.

The City will engage potentially affected businesses, relevant government agencies and consult the broader community as nodes are approved and confirmed.

Further resurfacing is planned along South Terrace from Douro Rd to node two Jenkin Street during the 2021/22 financial year.

How will the painted surfaces used hold up to wear and tear?

The decorative paint product used at node one is guaranteed to last five years. We'll make provision in future maintenance budgets to reapply any worn areas when needed to keep the paint fresh and vibrant. Inspiration for the design and colour scheme for Node 1 was the links between South Terrace and street art in the area.

Why was the Jenkin Street intersection chosen as the next location?

In a choice between Charles Street and Jenkin Street for node two, the City chose Jenkin Street as the next proposed location for the following reasons:

Will the treatment at the Jenkin Street intersection be similar to node one?

Following node one, we asked for your  ideas and input to inform the design of node two. The treatment will be similar to the improvements completed at node one. It will include narrowing the road to provide a safer pedestrian environment by reducing the crossing distance. It will also allow for the footpath to be widened, creating more space for pedestrians, street furniture and trees.

In 2019 the City completed the drainage works (at the cost of $100,000) in preparation for node two (Jenkin Street) and Council have now adopted a budget of $268,000 for the 21/22 financial year to complete South Terrace node two using funds that have been sourced from the Federal Government’s Local Roads and Community Infrastructure Grants.

Once node two is complete four more temporary speed bumps will be removed.

When will you start work on node two?

Node two at the Jenkin St intersection will be completed in two phases.

Phase two streetscape works were put forward in the 2019/20 financial year budget but not adopted. In the 2021/22 financial year, a budget of $268,000  for node two was adopted by Council.  Construction works are due to begin in October 2021.

Will I be able to access the South Terrace / Jenkin Street area during phase two works?

Will node two have artwork (and what will the colour scheme be)?

Yes, the South Terrace streetscape improvement at Jenkin Street will receive its own artwork.  The artwork draws its inspiration from the existing pavement mosaic outside the Meeting Place on South Terrace. 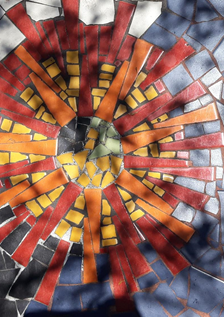