Why is a dog on-leash in the bushland rule being proposed?
How are other bush forever sites in Perth managed?
What is the City of Fremantle doing to minimise disturbance to the bushland?
What else is the City of Fremantle doing to improve the condition of the bush?
What does the City's management plan for Samson Park say about dogs?
What is the history of Samson Park?

Why is a dog on-leash in the bushland rule being proposed?

Samson Park is a rare piece of suburban conservation bushland that features Fremantle's last remnants of jarrah, marri and tuart woodland and is an important wildlife habitat. The park's recreation amenities - including the bush walk trails, playground, exercise stations, bbq and dog exercise areas - are popular with local residents and visitors, presenting various challenges to ensure the bushland stays resilient and healthy.

The proposed policy change is one of a number of bushland conservation management practices being implemented by the City of Fremantle.

In 2017, the City sought to alleviate the pressure that dog walking puts on the bush by proposing dogs be prohibited from the bushland, but allowed off-leash within the grassed parkland area.  Feedback from people who walk their dog/s in Samson Park demonstrated a strong desire to continue to allow dog walking access in the bushland.

Community engagement was held in November - December 2017. This included an online survey, which received 213 responses, and a community meeting in February 2018. A summary of outcomes, and feedback received is available in the community survey report.

To accommodate all park users, the City is now proposing a compromise between the previous proposal and the current policy. The approach seeks to balance the need to improve conservation outcomes while continuing to allow dogs on leash in the bushland.
top of the page

How are other bush forever sites in Perth managed?

The table below compares Samson Park to similar reserves in the Perth metro area. 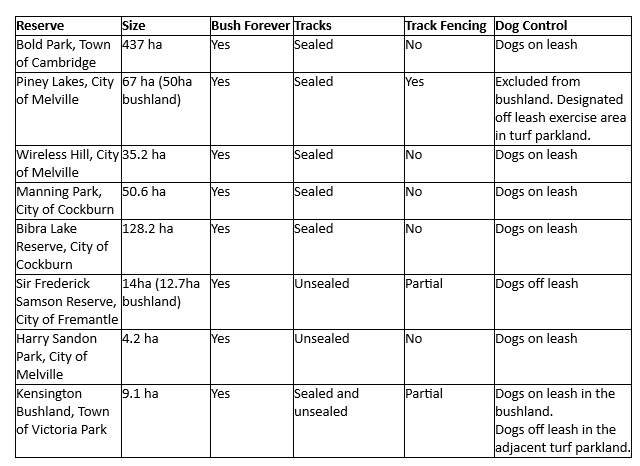 What is the City of Fremantle doing to minimise disturbance to the bushland?

As part of the City's management plan for Samson Park, the City of Fremantle will formalise the bush walk trails by sealing them with limestone (or a similar material), fence areas to reduce off-track movement, reduce the number of informal tracks and improve information and educational signage.

A plan to formalise the walking tracks is being developed (as shown below), with the first stage of work expected to begin in 2019. 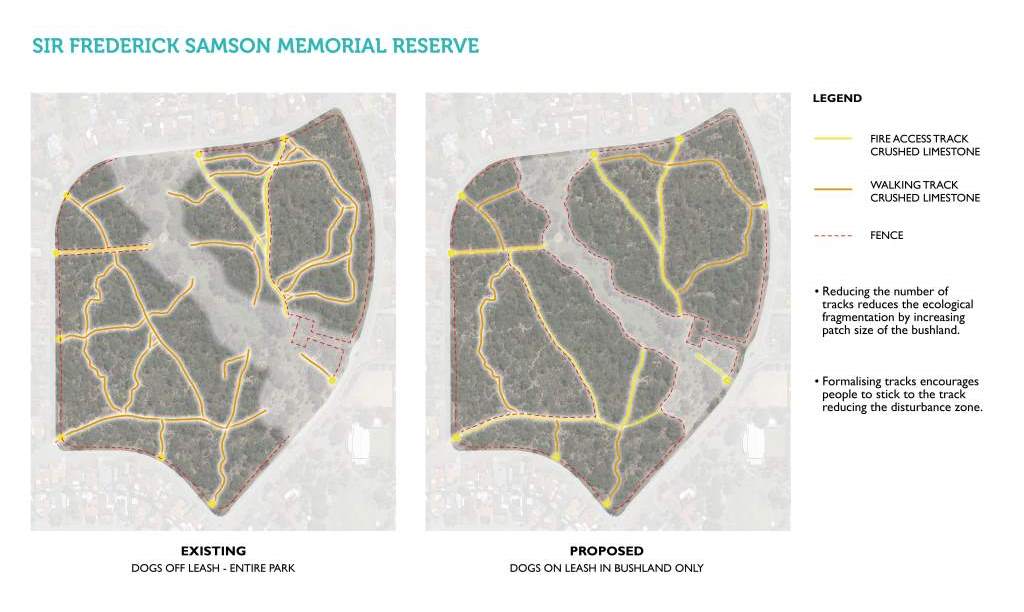 Minimising off-track movement will give the bushland a better chance to establish, both from self-seeding and revegetation programs, improving diversity and overall condition. Reducing disturbance will also improve habitat for native fauna. 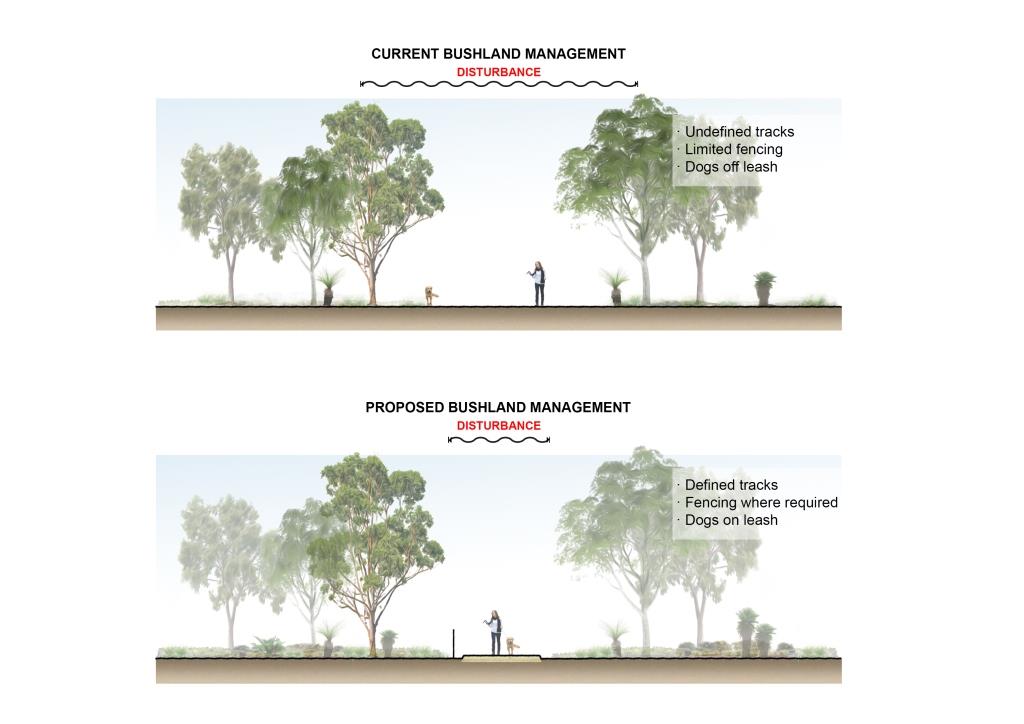 What else is the City of Fremantle doing to improve the condition of the bush?

The City will continue to maintain and improve bushland in Samson Park by planting new seedlings,  controlling weeds, maintaining tracks, monitoring wildlife and vegetation and controlling feral animals. We will also continue to promote the benefits of bushland conservation to the community and support groups that wish to be involved in conservation programmes.

What does the City's management plan for Samson Park say about dogs?

Over the years, the City has requested dogs owners consider their impact and leash their dog and remain on designated walking trails. Controlling dog access to the bushland is consistent with the City’s Management Plan prepared in 1989 with revisions in 1995, 2006 and 2014.

The initial management plan noted that “Samson Park be restricted to passive forms of recreation only”. Where it identified the retention of some access and trails it stated the objective was to develop “a system of trails within the park that provide access to the lawned recreation area from various points on the perimeter of the park and to provide paths for nature study activities and quiet retreats in the bush”.

Subsequent revisions noted proliferation of tracks and track widening caused by continued off-track traffic. The 2006 report noted: “As Samson Park is the only dog exercise area available in the suburb, excessive regulation of dogs in the Park is undesirable. However, owners should be encouraged to leash dogs in bush areas. In areas of particularly high conservation value, dogs should be excluded”.

The 2014 plan noted that the park “receives considerable pedestrian pressure from the local community recreating in the park. This dynamic of isolation and high usage, puts pressure on the natural ecological functions in the park’s bushland, reducing the genetic fitness of the vegetation and the overall ecological resilience of the bushland”.

What is the history of Samson Park?

Sir Frederick Samson Memorial Park (Samson Park) is an important conservation reserve located in Samson within the City of Fremantle. It is approximately 14ha of grassed parkland (1.3ha) and bushland (12.7ha).

The first management plan prepared for the park and adopted by Council in 1989, describes Samson Park as follows:

“When Fremantle was first being established little thought was given to setting aside reserves of natural bushland for future generations to experience. The ‘scrub’ was systematically cleared for housing and agriculture….Examples of the indigenous vegetation that are found in the older parts of Fremantle today remain in areas that were unsuitable for development, like the cliffs of Rocky Bay.

With both the release of ex-army land in 1971 for the development of Samson Estate, and a new era in town planning policy, an example of natural bushland was retained and named after the former Mayor of Fremantle, Sir Frederick Samson. This park contains Fremantle’s best natural bushland area. Tall tuarts and Jarrah are found there along with many native shrub species. Some thirty-two species of birds inhabit the reserve with sightings of indigenous animals also. But like many other urban remnant bushlands it has been degraded over the years through repeated fire, trampling and off-road vehicle use.”

The bushland was originally recognised for its significance as an urban bushland reserve in the former Environmental Protection Authority’s (EPA) System Six Reserve System (1981). The report recommended a management plan be prepared for the park, with the primary management objectives of “encouraging growth and regeneration of indigenous flora” and “giving priority to passive recreation activities which are compatible with the conservation of flora and fauna” (City of Fremantle, 1995).