What was the outcome of the consultation completed in November 2017?
Why did council defer a decision on a traffic treatment?
Has the City of Fremantle investigated a signalised ('green-man') pedestrian crossing?
What was the outcome of the City's meeting with the Transport Minister's office about this issue?
What information has Main Roads WA provided on the safety benefits of a guarded crossing?
What's this project about?
Why did the City restrict cars turning right in and out of Scott Street?
Who is the responsible authority for Hampton Road and Scott Street?
Who is funding these works?

What was the outcome of the consultation completed in November 2017?

Of the 147 submissions we received:

More information is available in the Community Engagement Report.
top of the page

Why did council defer a decision on a traffic treatment?

A report was presented to Council on 13 December 2017, recommending that Option 1 be endorsed and implemented. After careful review, Council decided to put a decision on hold, and asked City officers to investigate the possibility of a signalised pedestrian crossing and meet with the Minister for Transport to discuss further.

Has the City of Fremantle investigated a signalised ('green-man') pedestrian crossing?

Yes, the City investigated two signalised options in consultation with Main Roads WA. This included a signalised (traffic light controlled) intersection with pedestrian facilities at the corner of Hampton Road and Scott Street and a signalised mid-block crossing, opposite the shopping centre on Hampton Road.

A preliminary cost estimate found a signalised intersection would exceed the $200 000 budget considerably, as underground services on Scott Street would need to be relocated. In addition, Scott Street is a minor road with relatively low use that does not warrant traffic signals, which would add to congestion, impacting the service level of Hampton Road .

A signalised mid-block pedestrian crossing didn't meet Main Roads WA criteria, as the pedestrian numbers are significantly lower than the requirements. A survey carried out by the City during the school term in June 2017 and May 2018 found the number of pedestrians using the crossing at peak hours was significantly less than MRWA’s criteria of 350 pedestrians in an hour, or more than 175 per hour crossing over 8 hours on an average day (Figure 1). The number of pedestrians crossing the intersection outside of peak hours was substantially less (Figure 2). 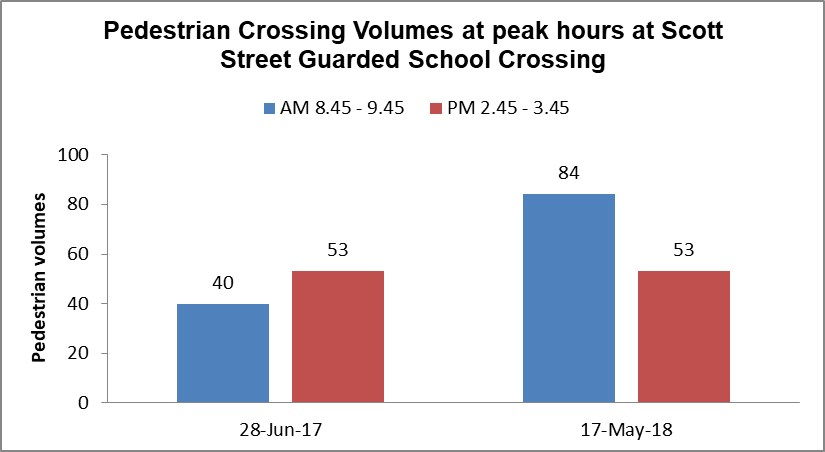 What was the outcome of the City's meeting with the Transport Minister's office about this issue?

City officers met with the Transport Minister's office and Main Roads Western Australia (MRWA) in May 2018 to review the design options presented for community consultation and the criteria used by MRWA for installing traffic lights with pedestrian signals.

As an outcome of the meeting, the City learned this would result in the loss of the school crossing guard to assist school children cross safely, as WA Police do not provide the service at signalised crossing locations.

The City was also advised a signalised pedestrian crossing did not satisfy MRWA criteria because the pedestrian numbers are significantly lower than the requirements.

What information has Main Roads WA provided on the safety benefits of a guarded crossing?

The following information was provided to the City of Fremantle by the Safety Branch at Main Roads WA:

Guard control crossings are generally the preferred form of crossings for roads near schools where the predominant users are children under 12 years of age for a number of reasons.

A large body of literature covering children’s cognitive ability shows that they display inadequate search patterns at intersections and have difficulty in estimating speed, direction and distance of oncoming vehicles. In addition, their smaller stature prevents them from seeing the complete traffic situation and makes them less visible to drivers. Furthermore, adults have a tendency to overestimate kids’ pedestrian skills and make inadequate adjustments to speed.

These problems may be aggravated at signalised intersections, as young pedestrians are less likely to search for traffic than at non-signalised crossings. Some children trust that it is safe to cross against the red light and that adults will protect them and stop instantly. For similar reasons, zebra crossings are less advisable. Younger students may step out onto the crossing when a vehicle cannot stop before them.

Schoolchildren consider uniformed crossing guards safer than other types of crossings. They are attracted to guard control crossings and not to the adjacent, unsupervised road sections. Moreover, speed compliance increases in the presence of crossing guards.

What's this project about?

This project is about improving pedestrian safety at the intersection of Hampton Road and Scott Street, which has a history of vehicle and pedestrian accidents.

Why did the City restrict cars turning right in and out of Scott Street?

In the last five years, there have been eight traffic accidents at the intersection of Scott Street and Hampton Road. Two of the accidents involved people attempting to cross Hampton Road being hit by a car, compelling the City of Fremantle to examine ways to improve pedestrian safety. In March 2017, the City of Fremantle installed a temporary median on Hampton Road, allowing only left in/left out traffic movement from Scott Street. We did this to address safety issues caused by drivers using the bus lane to overtake cars waiting to turn right into Scott Street.

Who is the responsible authority for Hampton Road and Scott Street?

Who is funding these works?