What changes will be made and why?
What is the process for this project?
What is the budget for the renewal?
Have we been consulted about this before?
Can the playspace be moved?
How will the project impact parking for netball users?
What will happen to the exercise equipment?
Will the embankment be stablised?
Will the slide and rope climb on the embankment impact the netball courts on the upper oval?
Will there be a drink fountain in the playspace?

What changes will be made and why?

The current combination unit in the park is over 20 years old and needs to be renewed as part of playground works across the City of Fremantle to replace non-compliant units.

As expectations of playgrounds have changed over time the City would like to understand the local community's preferences for the style of renewal.

Based on the community ideas and needs, as well as the budget, a concept design will be developed by a landscape architect and presented for feedback.

What is the process for this project?

We will be gathering input from the online survey, drop-in session and a school visit.

The community ideas and needs we hear will be developed into a concept design by a landscape architect. This will be presented back to the community for feedback, before being amended as required and implemented.

The installation stage will be dependent on what the final design contains, updates will be provided. You can check on the current status on the main project page under 'timeline'.

What is the budget for the renewal?

This project is part of the City's ten year playspace renewal plan, and the budget only covers changes to the playspace along Forrest Street. Improvements to the wider park are beyond the scope of this project.

The budget does not allow for the relocation of high-cost items such as barbeques and shelters.

Have we been consulted about this before?

In 2015 the Gibson Park Precinct Group met with the City of Fremantle to make suggestions for renewal of Frank Gibson Park. The suggested changes included developing pathways around the park, replacing the exercise and play equipment and improving vegetation coverage. A concept plan was developed, however the plan was not implemented due to budget changes.

The information gathered in 2015-2016 will be used to inform this consultation, but the budget for the current project is specifically for the playspace only and does not include the wider park area, so additional community consultation is needed.

Can the playspace be moved?

The current location is considered to be the best place for the playspace:

While the playspace won't be moved from this corner of the oval, there may be a better way to configure it. The site map below shows two possible layouts for the playspace. 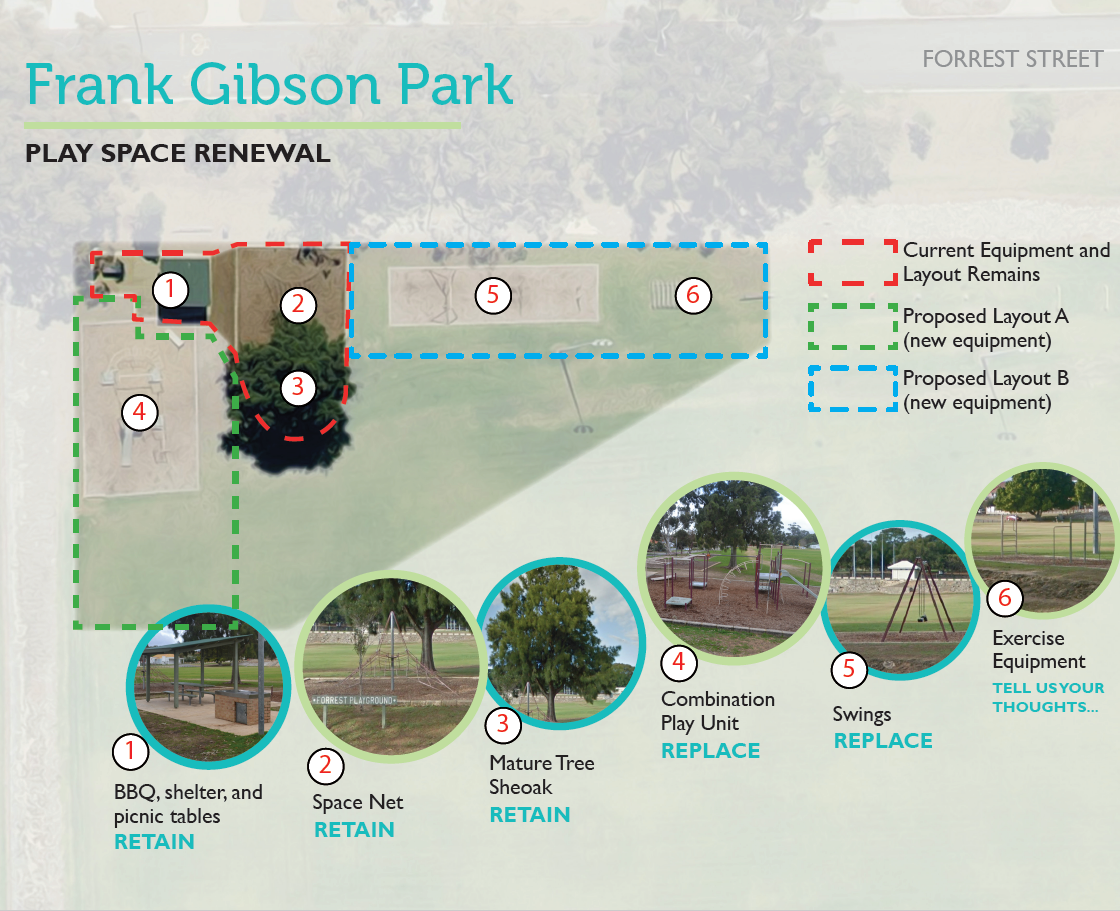 How will the project impact parking for netball users?

There is no intention to reduce the amount of parking available for netball users. The new playspace is very similar in size and footprint to the existing one.

However the playspace must remain safe for use at all times.

What will happen to the exercise equipment?

The exercise equipment is not due for renewal for approximately 4 years subject to budget approval, and the majority of it will remain.

The leap frog steps will be relocated into the new nature play area and the mulched area with the existing swings will be partially reabsorbed by the new playspace, while the remaining part will be removed and returfed.

Will the embankment be stablised?

Will the slide and rope climb on the embankment impact the netball courts on the upper oval?

No. There is enough clearance at the top of the embankment for circulation around the slide entry, and for the 'no obstruction zone' clearance around the netball courts.

Will there be a drink fountain in the playspace?

The possibility of having a drink fountain was investigated. As the available budget is very tight it was decided to concentrate on the provision of the playspace elements rather than other associated amenities such as a drink fountain.

There are also existing drink fountains closer to the netball buildings, which is considered quite sufficient for the time being.