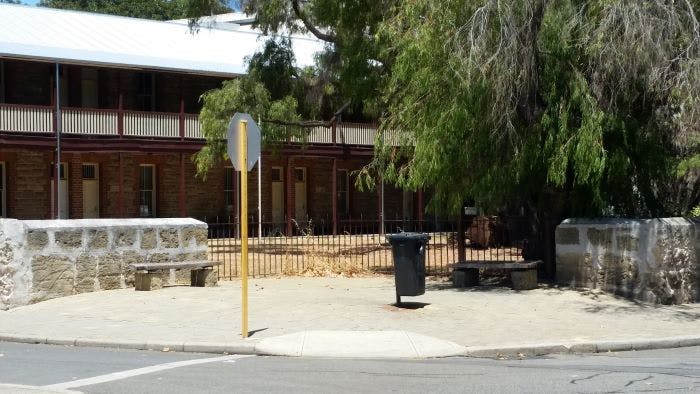 Under the current proposal - the two street benches and the rest area located on the outside of the limestone wall/iron fence are within the area proposed for closure and amalgamation.

Why is part of Henderson Street road located within the limestone wall?

Prior to 1984, the traffic was congested and in order alleviate the traffic issues, a proposal to create a round-a-bout was suggested at the intersection of Henderson Street, Queen Street and Holdsworth Street.  However the Parry Street extensions (in 1984) provided a by-pass and removed the need for a round-a-bout at Henderson Street leaving the subject land behind the wall as road reserve.

Why is the closure and amalgamation being proposed?

This proposal will provide the applicant with the opportunity to purchase the land as requested and rectify the encroachment. In addition, the applicant proposes to close a portion of the road reserve on the western side of the limestone wall noting the future use of the land "is to landscape the entire area, thereby making it visually appealing and a feature to the City of Fremantle". Any financial consideration will be a matter between the applicant and the State Government.